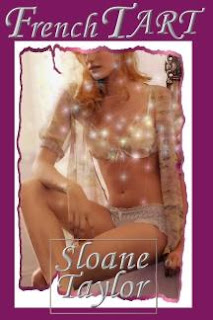 Determined to prove herself and shed her party girl image, Donatienne Dubois pins her hopes on the exclusive cooking school in Nice, France. One by one her expectations are shattered by a foul-mouthed parrot, a bogus Michelin chef, and a headmistress with a heart of tungsten steel. Her lifesaver is a bad boy hunk too hot not to handle.

Sebastien Reinard is incognito, hating every minute. To pose as a student while protecting a rich wild child is his version of hell, until he partners with the slice of Crème Brule good enough to eat.

Class takes on a whole new meaning as Doni and Sebastien heat up the kitchen when they discover honey has better uses than sweetening tea.

Donatienne’s running shoes squeaked to a halt on the cracked, gray linoleum. Fuck him? She didn’t fuck just anyone, especially if she didn’t know his name.

“Not unless you have more money than I could ever dream of, you pig.” She refused to turn back toward the crackly voice.

“What? Is your pussy made from gold?”

She gritted her teeth. Insolent bastard.

“Yes, it is. And equipped with a set of rusty fangs to rip off anything that tries to get inside.” Smartass answers weren’t her best first impression at the haute cuisine cooking school she’d waited so long to attend. She had to shake the lowlife who thought he could get away with insults before Chef tossed her out.

Ignore him. Just keep moving. Doni straightened her shoulders and walked past the double door refrigerator.

“Perhaps you prefer to give Pierre a blow job. He would make it worth your time.” A cackle filled the air. “Come on, baby. You know you want me, you slut.”

The fine hairs at the nape of her neck jumped to attention. Doni whirled around, swinging out her arm. She launched her heavy tote at the dumpy man in the splattered apron planted in front of the stainless steel stove.

A satisfying sound to Doni’s ears as her bag connected with his diaphragm and he buckled.

She sprinted a dozen steps toward him, punching air until her fists mashed into his doughy flesh. He shot out his hands. She dodged to the right, away from his reach. Her feet slipped on the waxed floor. Flailing her arms, she grabbed for anything handy. Crash. A white cloud billowed up, blinding her. They fell to the floor with Doni on top, tangled in a mass of apron and legs.

“Right, and this is only foreplay.” Just to leave a permanent impression on the scruffy chef’s assistant, she yanked his handlebar moustache until her fingertips were covered with what she hoped were tears.

A pair of strong arms wrapped across her breasts then lifted her off the scum bucket that reeked of tarragon.

“Mademoiselle, calm yourself.” His rich baritone did nothing to soothe her. It created the opposite effect, which shocked Doni as a coil of heat charged to her clit.

She spun around in the now relaxed circle of muscle and sinew, ready to either claw out his eyes or flip him to the floor. Her mind wanted to do one while her trembling body thought the floor would prove more interesting. The hollow of his throat was lip level to her with curly brown hairs peeking over the ragged edge of black his tee-shirt. With effort she tore her thoughts away from licking his muscular neck and forced her glance up to his face, only to be met with a pair of twinkling, amber eyes. Nausea rolled over her.

“Chef Bonnot, I’m so sorry.” The urge to bow and kiss his hand overwhelmed her.

“I apologize, sir.” Damn, her cherished plans to own a five-star restaurant flashed before her eyes. Somehow she had to make this right. For once she would prove to her father she wasn’t the major screw up he thought. She choked back the tears, threatening to gush like Niagara Falls. “I wouldn’t normally act like this, but your helper talks like a pig and I over-reacted. I’m really sorry.”

He laid his fingertips over her lips. Strong and warm. A shiver ran through her at the thought of sliding her tongue over the pads.

“Stop talking.” She sucked in air. A sensual aroma of lime and spice filled her lungs as she stared up at the king of haute cuisine.