The Naughty Ladies of Nice 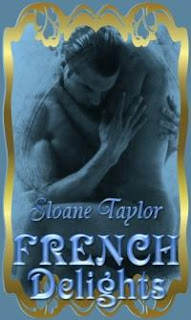 Lisette Hugo arrives in Nice, France to rescue her irresponsible friend then pamper herself with an overdue vacation. As an added delight, her run down rental cottage comes complete with a sexy French gardener well equipped to satisfy all of her fantasies.

Paul D’Laquois, an impoverished research scientist scraping by on the remnants of his family’s estate, has poured his meager resources into his work. He couldn’t be happier when a wealthy tourist rents his dilapidated cottage. That she’s beautiful, seductive and more than interested in him convinces Paul he’s not as dried up as his orchard.

The harsh light beat down on him, casting a long lean shadow as it hid his strong features beneath a wide straw hat. He dipped the brim lower, almost as if he took pleasure in teasing her. His body moved in time to the steady beat of the sensual music playing in her mind. She mouthed the lyrics to a song she’d often heard from her parents’ bedroom, You can leave your hat on. A knowing smile tugged at her lips. She leaned back in the overstuffed chair, her hands resting on the threadbare arms, ready to appreciate yet another of his magnificent shows.

Each afternoon he performed, and each afternoon she’d cut short any appointments to have a front row seat and watch his striptease. A delicious habit she had become addicted to.

Lisette stared straight ahead, fascinated as the stud began his routine.

He flexed his arms and she pressed her thighs together, enjoying the pressure that built between her legs. His muscles rippled as he undid the first two buttons on his blue chambray shirt. He turned sideways, just enough to build the anticipation of baring his muscular chest.

The Chippendales had nothing on him, she thought scooting to the edge of her chair, grateful for the darkness in the room that shrouded her.

The stiff red lace on her bra pressed into her swollen breasts. She rolled her shoulders to make the fit more comfortable, but it did nothing to relive the tingle in her nipples.

She undid the first three buttons on her blouse, mimicking his actions. Her imagination raced at the thought of his long fingers on her. Pretending it was his, she dipped a finger down her cleavage. Her breath came in short pants and echoed in the now silent room.

He tugged his shirttails from his slacks in a smooth move that exposed his sharply defined abs. Droplets of sweat glistened on his bronze flesh as he lowered the shirt from his body. Lisette watched, her eyes glued to the beads as they crawled down his back, delving below his waistband. She swiped her tongue over her parched lips, wishing she could lap up every single drop.

Neatly, he folded the worn cloth then bent and laid it at his feet. His languid movements a beautiful torture to this single woman. He allowed his hat to roll off his head and down his arm then placed it on the shirt. His black ponytail brushed against the thick column of his neck. The loose ends of the thin leather strip holding his lion’s mane in place grazed the small white scar on his shoulder.

He stretched his arms high in the air then arced them downward and rested his hands at the small of his back. Slowly, he swiveled his upper body from side to side. She licked her lips again as she stared at his dark brown nipples, tight and pointy.

His muscles rippled as he bent over to do something with his black work boots. The material of his worn khaki slacks pulled tight across his perfect ass, accentuating the outline of his large balls. Perspiration moistened her skin as she thought about cupping him in her hand, maybe even taking a small taste. She brushed at a strand of hair that had worked loose from her plastic clip, not wanting to miss one second of this perfect man in action.

He stood then tugged on his belt at the exact location her hand itched to stuff a wad of paper euros. She shrugged out of her blouse, her body heat too hot to bear the thin fabric.

She traced an index finger around her puckered nipple, squeezing her thighs tight together. The need to release the orgasm pounding in her trembling body intensified.

Lisette stood and lifted her hair off her damp neck, swaying her hips in time with his. Her eyes closed for a brief moment as she reveled in the fantasy of his hard body pressing her onto a bed. She opened her eyes to see his bright sapphire gaze watching her. A knowing smile played on his full lips.

He easily hoisted a large shovel with one hand, swinging the handle up close to his flat stomach. He wrapped his hands around the black metal, shoving the tip into a dirt pile. His ass thrust forward as the blade burrowed in deeper then he tossed the soil under an almost dead tree. With every repeat of the sexy movement, his speed increased and her temperature climbed until the little hill was gone.

“Way to move that spade, baby.” Her hands shook as she combed her fingers through the tangled strands of her long hair.

The need to feel him inside her coiled through her body and settled in her dripping sex. She slid her skirt over her hips, allowing it to puddle to the floor. With one arm wrapped tight across her breasts, she skimmed her other hand down until it reached the soft flesh of her abdomen. She traced the lacy band of her wet thong until she slid her fingers beneath the silky triangle that covered her mound. Soft moans escaped her dry throat as she glided two fingers lower through the damp hairs. Expertly she parted the slick folds of her swollen labia, begging for a man’s tongue to lap between them.