Lizzie T. Leaf has a comedic talent that carries over into all her work, even death. Unsure? Well, read on my friends for Lizzie's unique approach to DEAD. 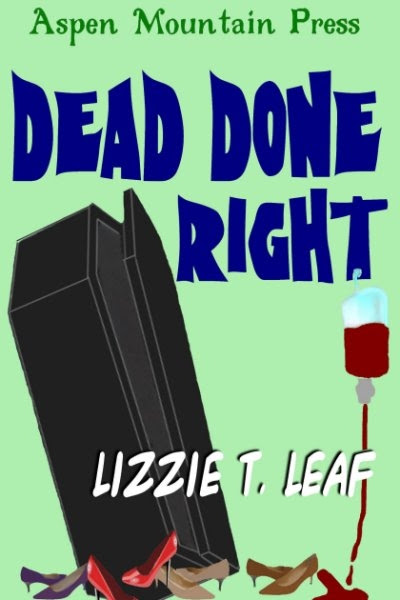 DEAD DONE RIGHT is the print version of the first two vampire novellas in the DEAD series.

WAKING UP DEAD:
Things change for Deb Stein when she wakes up smelling pine. Thanks to a weird stranger lurking outside the mortuary, the knowledge she is now one of the waking dead doesn’t do much for her mood. Now she’s out for blood, especially the blood of the one who turned her.

DEAD FAINT:
Billie Joyce’s dream trip to the big city ends in her facing death at the hands of a couple of thugs. The face that appeared as she begged not to die wasn’t an angel, but one of the living dead. Now she’s on their team, but there’s a problem—she faints at the sight of her new food source—blood. 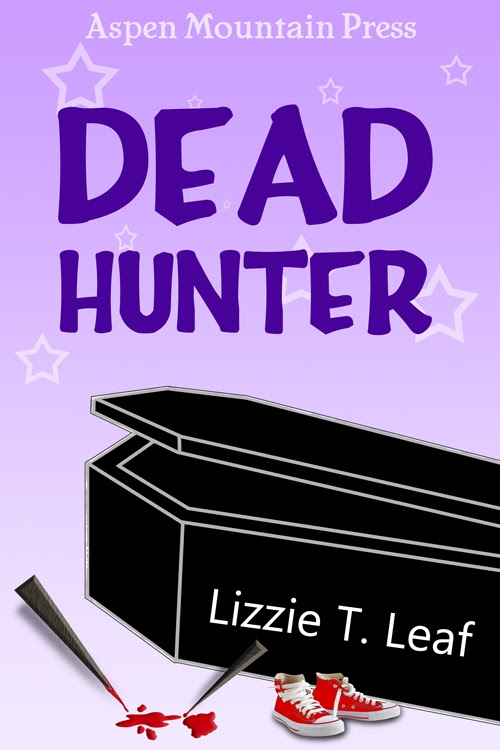 BLURB:
Arie Anne Hews is a trained vampire hunter out for the kill. A chance meeting with the hated beings has Arie in turmoil. Especially, when handsome Dr. Jonas Nickels is on the scene.

Jonas Nickels has no desire to be involved with a mortal, but can't resist the dark-eyed beauty. Even if he is on her hit list.

EXCERPT:
Vampire hunter, ArieAnne has possibly met the man of her dreams, but he triggers her alarm which she chooses to ignore. Is it because of the other emotions he triggers?

Blinded by the driving rain, Arie rounded the corner and slammed into a wall—a wall with arms that reached out to catch her before her ass hit the ground. Steadied against the hard body, she knew she’d scored. The hardness that dug into her stomach shouted volumes about his reaction to their close proximity.

Jonas transferred his hold on her body to her arm and pushed her toward the door.

“Let’s get inside before we drown.”

She’d be willing to drown if he kept holding her that way, but didn’t resist as he hustled them into the restaurant.

Settled in their seats with their raincoats dripping from two empty chairs, Jonas leaned forward and gave her a look that drove chills and heat throughout her body. “I wish you would have let me pick you up tonight. We could have gone someplace closer to your home and we both would be a little less wet.” He covered her hand with his and smiled.

Arie shifted uncomfortably. The last thing she needed was for a man to ring the doorbell and have Pop answer it. Her father was her best friend but, like all fathers, he seemed to labor under the impression his little girl was an innocent babe-in-the-cradle.

Dating was a subject they’d briefly discussed when Arie was sixteen and it was obvious her father discouraged it.

“You can date when you’re thirty,” he’d joked.

Okay, she was thirty-plus now and still not sure how her old man would react to a member of the opposite sex picking her up for a date, especially when he saw how she was dressed. Her uniform of t-shirt, jacket, loose pants—all in black—with the only contrast her red high-tops, had been replaced by a pushup bra, a scoop-necked mini-sheath and a pair of come-fuck-me stilettos.

And she knew damn well her barely disguised lust for the man she sat across from right this moment, wouldn’t go over with the uptight minister side of her father.

That brought her around to the lust. Why did she feel it so strongly for Doctor Jonas, given her few ventures down that path had been disappointing? The hardness of his male anatomy when they’d collided earlier had excited her. Arie wanted tonight to end with more than a chaste kiss on the cheek like last night. Was she setting herself up for yet another disappointment?

What was wrong with her? She liked men but in bed she hadn’t met one who could ring her chimes.

A squeeze of her fingers pulled her from musing about her lack of sexual excitement. It was time to focus on tonight’s potential. Jonas wasn’t a vampire whose ass she could kick and move on. But then again, there were those chills across the back of her neck. Why did she get such conflicting readings? Did heightened sexual energy play havoc with her system? She’d never experienced this kind of tension before and it was all new to her. A smile played across her mouth at the thought of the possibilities in store for her.

Here are Lizzie's links to read more on her DEAD series and her other superb books:
WEBSITE

Thanks to Lizzie for sharing her work with us. My VISA will get a good airing today. :) I'll be back next week. Until then...

Sloane Taylor
Sweet as Honey...Hotter than Hell
www.sloanetaylor.com
Posted by Sloane Taylor at 8:15 AM