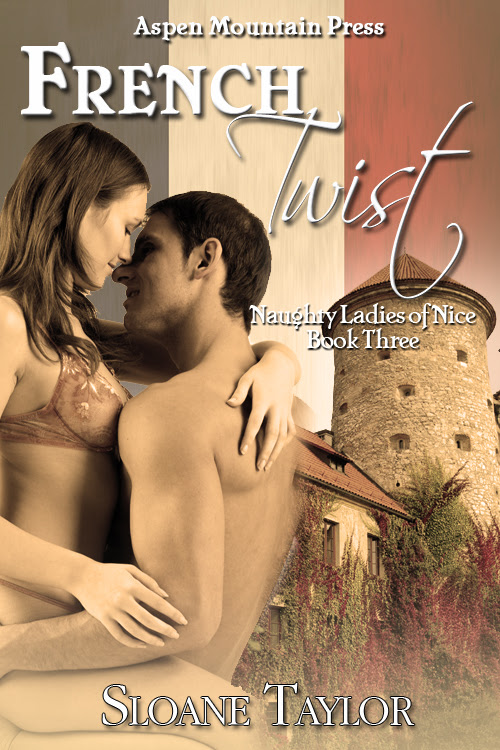 Here's an excerpt to entice you. :)

BLURB:
Interpol agent Claudette D’Laquois is on the run. Dull Uncle Paul and his rundown chateau in Nice, France are her only safe haven…but she never planned on the delectable estate manager who is even more dangerous than the Russian mob boss who wants her dead.

EXCERPT:
The throbbing burst into her head again. She rubbed her temples. “S’il vous plait, do not make this more difficult.”

“Hey, I get it. You’re this tough woman who can handle herself in any kind of danger. But, you need to look at it from my point of view.” He stepped behind her and massaged her shoulders, edging up to her neck.

She sighed with each knead that worked free the stress knots.

“Let’s just say this Cesar doesn’t come alone. You ever figure he’s not a good guy?” Sarcasm streamed with each word.

“I know him.” She shrugged off his hands and turned, her fists balled tight. “You do not.”

“I’m not stupid and I do know a bunch of bullshit when I hear it.” His words bounced off the walls. “You think this fucker is your long-lost savior. Not hardly likely, chickee, if he bailed on a high profile government job and left you to the wolves.” He squinted at her, a vein pulsed along his forehead. “Was your commander right? Did you and James Fuckingbond have a couple of rolls in the sack and now you think he’s gonna be the righteous man of the hour? Is that all it takes with you? A fast fuck and a couple of swats on the ass to make you bend over and suck mud?”

“You dare to speak to me this way?” Red flashed before her eyes. “One afternoon of sex and you think you own me? Know what my life is like? How it should be orchestrated? You assume the right to be my master?” Meeting him decibel for decibel, she yelled, “You are an idiot!”

She swung out her hand, ready to slap his face. Hard.

With an expression cold and fierce, he leaned into her.

“Don’t do it. Don’t do one fucking thing you don’t want done back to you.” He stood his ground, fists planted on his hips. “I’m a nice guy. A fucking gentleman until someone, and I don’t care if she is a broad, muscles me. You got that? Loud and clear? Has it sunk you’re your brain? I will not—”

A low growl came from deep in his chest. In slow motion, he rubbed his cheek along her red imprint, eyes narrowed to slits. “That’s it, baby, party’s over.”

He grabbed her wrist and spun her around, flopped onto the bed, and yanked her over his knee.

Her cotton skirt shredded like tissue as he yanked it up over her ass, exposing her boy shorts.

“I told you before you needed a good spanking and the time’s come.” The satin panties were ripped away.

His hand cracked down on her firm rear. The sting raced across her flesh, charging heat to her clit.

“Ow!” She struggled to get free, flailing her legs and arms, but his free hand pressed across her back, holding her in place. “You will pay for this, you le fils d'une chienne.”

“Donald, stop before it is—”

His rigid penis pressed into her abdomen and dampness pooled in her panties. Pressure built between her thighs, increasing with each smack. She arched into him, loving it. Wanting this from the day they met.

Dieu, at this moment, he was her master. She wanted to be his equal, but not right now. Now, she wanted him to take control, had to know his brute force, needed him.

His hand slowed, then rested on her tingling flesh. He traced her butt cheek, edging closer to her perineum. She opened her thighs, praying he would slip between them.
He glided a finger along the crease, then dipped lower and stroked her swollen nether lips. Up and down, down and up, and she loved every stroke.

Cream seeped from her and her body begged for release. She no longer held back the moans.

“Had enough?” His words came out thick.

Sloane Taylor
Sweet as Honey...Hotter than Hell
www.sloanetaylor.com
Posted by Sloane Taylor at 8:51 AM