STEAMPUNK - IT'S ALL THE RAGE

British author Robert Appleton is a creative genius. His critically acclaimed books range from erotica to science fiction. Never one to stymie himself, Rob tackled the new Steampunk genre and produced a well-plotted mystery that keeps the reader guessing. 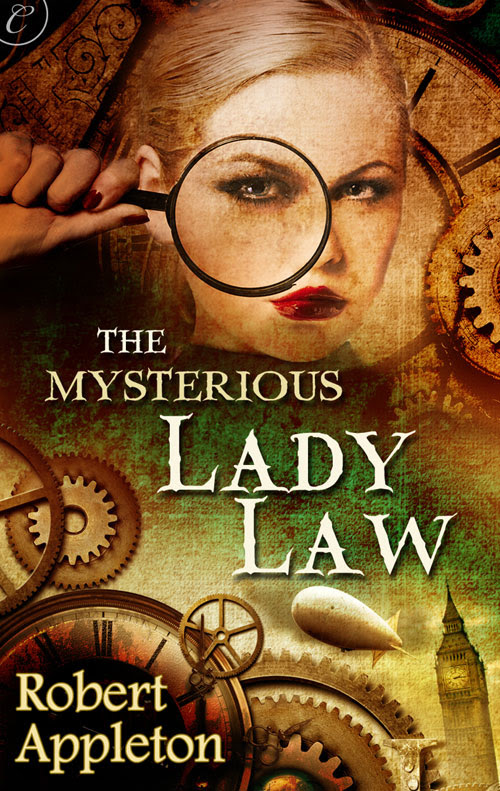 BLURB:
In a time of grand airships and steam-powered cars, the death of a penniless young maid will hardly make the front page. But part-time airship waitress and music hall dancer Julia Bairstow is shattered by her sister's murder. When Lady Law, the most notorious private detective in Britain, offers to investigate the case pro bono, Julia jumps at the chance—even against the advice of Constable Al Grant, who takes her protection surprisingly to heart.

Lady Law puts Scotland Yard to shame. She's apprehended Jack the Ripper and solved countless other cold-case crimes. No one knows how she does it, but it's brought her fortune, renown and even a title. But is she really what she claims to be—a genius at deducting? Or is Al right and she is not be trusted?

Julia is determined to find out the truth, even if it means turning sleuth herself—and turning the tables on Lady Law...

EXCERPT:
The hillside site at Dover was a veritable three-ring circus of photographers, police, picnickers, mobile sandwich and hot chestnut stalls, curious ramblers and more bespectacled men than Julia had ever seen congregated in one place. She guessed the latter were scientists and newspaper men. The Pegasus swooped low for a wonderfully close passing view of the iron mole, minutes before the start of its grand adventure. Other airships followed suit, then the convoy climbed, executed a one-hundred-and-eighty-degree turnaround and flew back over the machine, this time affording the passengers on the opposite side of the ships a clear view.

“It’s revving up,” Al enthused, responding to oohs and aahs from the far tables. “Come on.” He took Julia by the hand and hurried her across. A growl from below spun to a wiry squealing crescendo, much louder than she’d expected. No one would make way for Al, so to gain a better view he climbed onto a nearby chair. Julia offered to let him steady himself on her shoulder—the spectacle obviously meant more to him—but instead he helped her up onto a chair of her own.

Heady with excitement, she kept hold of his hand all while they watched.

The giant drill spun so fast she couldn’t make out its iron grooves. Its nose was a whirling monstrous cone of quite astounding power. Its silver body, a long, caterpillar cylinder covered with a spiral of toothlike treads, soon blackened under a layer of earth tossed up from the burrowing drill. A little over ten feet of penetration and already the debris cloud reached as high as the airships, masking much of the show.

Loud cheers and applause filled the Pegasus. Al beamed like a schoolboy at the fair. He reached over and gave Julia a peck on the cheek. She gripped his hand tighter. The Pegasus circled the cloud for a better view and she cheered along with everyone when the mole’s rear slid into the hillside and vanished, leaving a huge dark crater.

“It’s amazing,” she yelled above the furor.

“Professor McEwan…he doesn’t even know what he’ll find down there.”

“I know. He’s a braver man than I…the magnificent fool.”

“Do you think we’ll ever see him again?” she asked.

Laughing, high on the moment, he hurled his hat and gloves at the ceiling and replied, “I don’t suppose he’s thought that far ahead. Relish it, Julia. He digs down, we climb high, the sun is out. This is a good day to be English!”

The small brass and woodwind sections finished their rendition of “Land of Hope and Glory,” then deferred to the string quartet for a lively number. Strauss’s “Tristch-Tratsch Polka,” one of her absolute favourites. Couples from all over the dining room, and even a few from the upper deck, scurried onto the polished, glittering dance floor and arranged themselves in a circle.

“Now or never,” Julia teased, holding her arms out for Al to lift her down from the chair.

He grinned and leapt to her aid with the agility of a swashbuckler. “Hey, do you even know this dance?”

The dust cloud faded in the whorl of a breeze outside, permitting full, unfettered entry to the most brilliant sunlight Southern England had seen in weeks. It reflected off shiny crockery and bare tabletops and the roof of the spotless piano, blinding every dancer who spun in that direction. To her surprise, Al segued into the fast tempo with grace to spare, his compact, athletic frame matching her turn for turn. The feel of his hand on her waist made her giddy and his gaze found hers even when they changed partners. It inspired her to improvise during the ladies’ solo forays into the centre, and her bouncy quick-shuffles and spins soon drew generous applause from spectators. Al never once faltered. He was the steady glide to her soaring syncopation. This was her moment to shine. Hers and Al’s. While they were together, everyone else aboard the Pegasus faded away.

She had never enjoyed dancing more.

Have a terrific weekend. I'll be back Tuesday with a new teaser. Until then...

Sloane Taylor
Sweet as Honey...Hotter than Hell
www.sloanetaylor.com
Posted by Sloane Taylor at 7:28 AM