Centuries of war torn Europe are a writer’s mental playground, conjuring stories of love, hate, power, and torment. Only a talented author can skillfully bring all the passion from any of those eras to life. Emma Lane is such a novelist. DARK DOMINO, her latest release, is set during the Regency period and is one of her best works.

For those readers not familiar Emma, she lives in Western New York near Lake Erie on a few picturesque acres with her ever patient husband. They own and operate a small herbtique which keeps their days busy and interesting during the summer months. They have two brilliant adult children and a wonderful pair of grandchildren. In one way or another, the entire family contributes to her stories. They are her biggest fans and she is ever thankful for it. 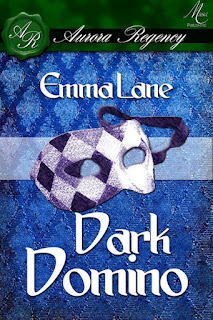 Sarah Louise and Ethan have loved each other all their lives, but a war and time apart may have jeopardized their relationship.

BLURB:
Ethan has been away at war for six long years—without a single letter to the young girl he left behind. He is certain she has forgotten him, but he is still drawn to her. Dressed for a masquerade in a dark domino, he leads her to the garden and tries to steal a kiss. Sarah does not know why the man in the dark domino is so familiar, and why a stranger should give her a feeling of home. When Ethan reveals his identity, Sarah’s anger and hurt overwhelm even her love. Can a new life be built on the foundations of a first love? Or will the Dark Domino remain alone forever?

EXCERPT:
The mask he wore gave him a sinister look exacerbated by his luxurious dark hair which was worn too long for fashion. It framed his face and highlighted a square, firm jaw line. The slight smile he sent to her revealed white teeth in stark contrast to his tanned skin. She felt a chill run up the back of her neck. Did he masquerade as a poet—or a pirate?

The stranger held out his arm to her and for some reason she could not comprehend, she took it. He led her away from her friends and through the crowd toward a set of French doors at the end of the ball room. They stood open and she could see various couples strolling in the garden beyond.

“Do you mean to kidnap me, Dark Domino?” she asked looking up into his face. “Should I be fearful?” She was only half teasing.

“Do not be afraid. It’s cool in the garden. I thought we could get some fresh air.”

He talked in a low voice, but gruff as if he had a cold. She listened intently, but could not identify the man. Yet he seemed so familiar. Surely he was one of her friends intent on teasing her by making her guess his identity. Then she would play the game as well.

“Then lead on, Dark Domino. I will follow where you take me.”

She smiled gaily as they left the ballroom and entered the semi-darkness of the garden. The fragrance of late season roses drifted by them; candle-lit lanterns hung here and there marking the pathways. Abruptly the stranger swung them into an unlit pathway and pulled her toward a white bench set against a lush vine twirled around an arbor. A fountain gurgled nearby. He pulled a white handkerchief from his pocket and swept the bench clean.

“My lady,” he said and bowed her onto the bench. She sat and looked up at him still standing before her. Tension tingled her senses; she was not really afraid, but the excitement of being in the semi-darkness with a strange man was beginning to disturb her.

“It is almost midnight, sir. Should we not reveal our identities a minute or two early?

He pulled her up and into his arms. His head came down, his hand cupped the back of her head and his lips found hers. His other arm came around her waist and pulled her close. As their lips touched he released his breath in a long sigh and held her tenderly, not moving. Sarah Louise was too surprised to move. She did not feel afraid or offended. She felt comforted for some reason and rested against him with her lips pressed close. He wrapped both arms around her and pulled her closer.

Sarah almost swooned with the feelings that overwhelmed her senses. The Dark Domino suddenly increased the intensity of the kiss, roaming his lips around hers almost hungrily. He pulled her so tightly against him she gasped for breath. As she opened her lips, his tongue probed desperately into her mouth.

“Sir, you forget yourself!” Sarah pulled away almost reluctantly. Why had she felt so at home there in a stranger’s arms?”

Learn more about the diverse life of Emma Lane on her blog and keep up with her on facebook.

Posted by Sloane Taylor at 9:03 AM