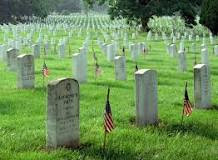 It is a 3-day holiday weekend! Time to take off with the family to the vacation cabin or maybe just go set up tents and make a campfire around which to toast marshmallows. Or maybe stay home, have a few friends over, break out the BBQ for steaks, cheeseburgers, chicken, and hot dogs, and open a few beers. And music to dance to. Oh yes—and hit a few of the many tempting sales, all of which promise big savings.

Sounds like fun, right? Well, it is! All 3-day holidays are fun.

Except, to some people a 3-day holiday is just another three days…

We have all heard the phrase, “freedom isn’t free.”

Take a moment and ask yourself if you really know what it is to be wet, hot, cold, freezing, thirsty, hungry, dirty, and stink. Ask yourself if you have ever really known fear or the joy of being alive. When was the last time you truly enjoyed something as simple as a hot shower, a breeze on your cheek or the smell of green grass?

I suggest you take a moment to reflect on what the day really means. The day is meant to remember those who have fallen in the service of our country. That means those ill-trained volunteer Soldiers who first met the British regulars at Concord and Lexington. Years later those volunteers, trained and dedicated, forced the British regulars to surrender and brought the war to a close at Yorktown, Virginia. The day is for those in blue and gray who fell at Antietam, Shiloh, Gettysburg, and Cold Harbor. It is for those who died in the disease, rat-infested, and gas-filled trenches of the Western Front in World War I. It is for those of the Greatest Generation who fell on a thousand battlefields around the world, and for those in Korea, Vietnam, Koh Tang Island, Desert One in Iran, Panama, Grenada, Mogadishu, and the Persian Gulf.

And now the day remembers those who have fallen in the Global War On Terrorism.

And sometimes…see a Soldier critically wounded when an IED strikes his vehicle and a white hot chunk of shrapnel rips through his body; watch three medics work frantically to keep him alive; listen to the radioed request for a medevac chopper; look at the faces of worried, angry Soldiers marking a landing zone and providing security while stealing glances at the sky, searching for the medevac; watch the medevac land in the LZ with an on-board medic ready to go to work to keep the Soldier alive; and watch a surgical team of doctors and nurses labor to save the Soldier’s life…sometimes, thankfully, there is one less name to be remembered that day.

“To you from falling hands we throw / The torch; be yours to hold it high.” From the poem “In Flanders Fields” by LTC John McCrae, MD, Canadian Army. You may read the poem in its entirety HERE. 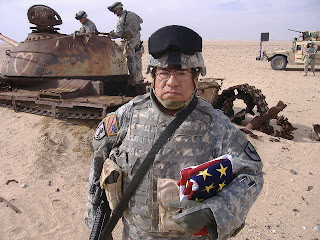 SS Hampton, Sr. is a full-blood Choctaw of the Choctaw Nation of Oklahoma, a grandfather to thirteen, and a veteran of Operations Noble Eagle and Iraqi Freedom. He served in the active duty Army, the Army Individual Reserve (mobilized for the Persian Gulf War), then enlisted in the Army National Guard; he was mobilized for active duty for almost three years after his enlistment. He continues to serve in the Guard, where he holds the rank of staff sergeant.

He is a published photographer and photojournalist, an aspiring painter, and is studying for a degree in anthropology—hopefully to someday work in underwater archaeology.