It's a NEW RELEASE

Meet the Magnificent Men of Munich, starting with suave David Steifel in Heated Negotiations, book one in the thigh-clenching four book series. 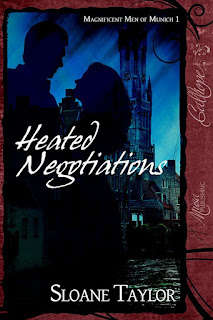 Mergers and negotiations are not just for the boardroom, especially when things heat up high over the Atlantic.

BLURB:
Travel agency owner Teddi Howard is Hell in high heels when she jumps a plane to Munich. Her goal—strangle the German tour operator who reneged on their exclusive contract.

German businessman David Stiefel well knows the feeling of being screwed over and is resolved to avoid emotional attachments. This strategy has served him well, until his chance encounter with the enticing Ms. Howard.

EXCERPT:
David Stiefel’s eyes kept track of the copper-haired female while he rolled up the sleeves of his striped shirt. The woman was oblivious to the stir she created as she strolled through the crowded O’Hare Airport Business Class Lounge. He stroked an index finger over his lips and studied her sleek figure clad in formfitting slacks. The appealing rear view was too good to miss. The pleasure of not seeing a panty line forced him to shift in his chair to adjust for the sudden pull in his jeans.

She bent over, hung her jacket across the chair back, and glanced over her shoulder at him. Their gaze held as a smile tweaked the corner of his mouth. He crumpled the wrappings from his beef sandwich and knew he’d just been offered dessert. Now all he had to do was make his move.

As his good luck would have it, right there on the floor just a few meters away was an airline ticket dropped by some unsuspecting person. He knew that delicious-looking woman had done it as a ploy to meet him.

He stood and paced off the few steps, never taking his eyes from her. He stooped, scooped up the packet, and walked the few extra feet before he glanced at the name printed in bold marker across the front. When he held it toward her, she fumbled with her purse and carry-on as if she did not know she had lost such an important set of documents. Very cool.

Standing in front of her, he leaned down just enough to catch her scent. A fragrance that reminded him of herbs.

Craving a little more David? Check out my answers to the Five W's on Holley Trent's blog.

I'll be back Monday with the Queen of Hot Jan Springer. Until then...